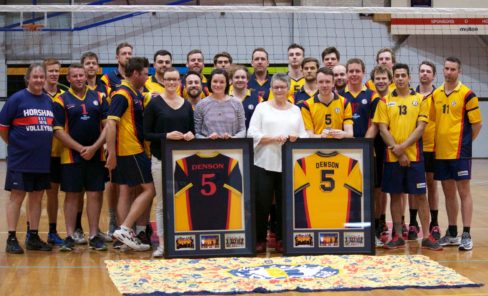 After successfully staging “Harry’s Match”, a charity match in recognition of Beyond Blue last year, Volleyball Horsham is gearing up for an even bigger “Harry’s Match 2” this year.

The match saw 23 of Harry Denson’s peers suit up during the Horsham Tournament last year in memory of a mate who was affected by mental health, and was played in front of a large crowd, which exceeded organizers expectations.

“We were blown away by the support last year both from a crowd perspective, as well as from a player’s perspective. We had some of Harry’s peers participate who hadn’t played for ages, but they all wanted to do it for Harry.”

The match fulfilled an unfinished piece of the puzzle that the family was still trying to work out the best way to honor the talented athlete.

“The family was grappling with how best to honor Harry’s memory, but at the conclusion of the match they were more than happy with what the association did for their loved one.”

So it was agreed to continue to support the family and the raising of awareness of mental health in young males, which is a growing trend and one that affects more and more people as the days go by.

“Unfortunately Volleyball Horsham members have been affected by recent deaths of young males hence the reason why Harry’s Match 2 will be bigger this year.”

Apart from honoring the memory of Harry, the match will also honor the memory of Ben Jolley, the son of Steven and Katrina Jolley and Abe Kingston the son of George and Jo Kingston, two youngsters who have connections to Volleyball Horsham.

“Steve and Katrina have thrown their support behind Harry’s Match 2 as they missed out last year, while George and Jo, through their daughter Elsie are both on board with the idea, which we appreciate.”

Harry’s Match 2 will be played on the Friday night prior to the Horsham Tournament and will start with a girl’s curtain raiser match between Kara Johnson’s peer group and a Murtoa girls’ team, followed by a short service honoring the three boys and will conclude with the men’s match.

“The overarching theme with Harry’s Match 2 will be that mates should look out for their mates, and that it is important that males should not be too afraid to open up and talk to their mates about their mental health.”

The whole tournament weekend will be promoting that message and supporting Beyond Blue.

“Volleyball Horsham is proud to be able to provide an opportunity for families and friends of the three boys to honor their loved ones, with volleyball being the vehicle for this opportunity.”

Harry’s Match 2 will be played on Friday November 22 from 8pm with the tournament running over that weekend.

“We encourage people to come and participate in the evening to help raise the awareness.”