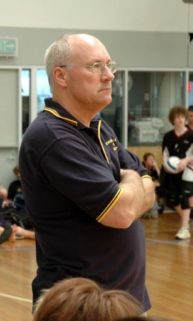 Rhys came to Horsham in 1983 and like those before him had an immediate impact. Set up the Midnight Club, and introduced a number of players to the sport in his time at Horsham High School and later Horsham College. Was a cagey player, with a liking to the faster ball outside, but equally adept at setting and being able to find the corner in position one. Was a Country Champs player in 1983, 1984 and 1996. Was a National Schools Cup gold medal winning coach and wife Mandy and all three daughters – Jessica, Lucy and Sophie contributed to the Association. Served on the committee and was a valuable link between the Association and Horsham High/College.