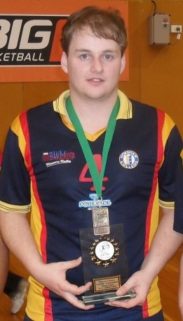 Matthew was not always destined to be a player, as Matthew was forging a decorated basketball career prior to taking volleyball more seriously. Represented Victoria at under 17 and 19 level, was a team MVP, won three National Schools Cup gold medals and a silver medal. Has four bronze and two silver medals in division one Country Championships and is an All Star best setter on three occasions and best libero. Has won the most “A” grade premierships than any other member, is a two time “A” grade MVP, three time runner up and has won eight Abud Medals as most consistent player. Has coached at National Schools Cup for a gold and two silver medals. Was the inaugural captain of the Western Phantoms and state league MVP in division one in 2012. Matthew has been a great contributor both on and off the court at a time when most of his generation gave very little back.