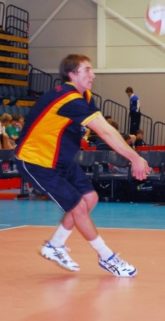 Lachie also came through at the same time as Matthew Berry and Tim Ladlow. Lachie represented Victoria at under 16, 17 and 19 level and was selected to play for SA at under 21 level when he went to Uni in Adelaide but opted out. Won three National Schools Cup gold medals and a silver medal and was a Victoria team MVP. Won MVP awards in “A” and “B” grade and was a Country Championships All Star selection in 2009. Will be remembered not only for being hit by a car near his bus stop, but on the court will be remembered for his dominant display at opposite in the Horsham team’s Men’s Division one Horsham tournament win in 2008 and opting not to take up the option of playing for Victoria Blue under 19 in favour of playing for Victoria Gold under 19 in 2007.