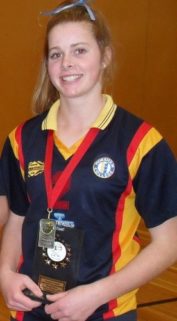 Jess was destined to be a good player as soon as she started belting those famous serves at the “C” graders as a 10 year old. Jess was a state representative at under 17 and 19 level, being the first Volleyball Horsham female player to make a Victorian Blue team at under 19 level. Was selected as a Country Championship division one best setter in 2012 and 2013 and division two in 2011 and 2010. Jess is a dual women’s division one gold medallist and division two silver medallist, a National Schools Cup silver medal and two State Schools Cup gold medals. Inaugural Western Phantoms women’s team member and MVP and Association “B” grade MVP, three time McIntyre Medallist in “A” grade and twice runner up in juniors. Will always be remembered for serving an entire set at the Bendigo Tournament in 2012.