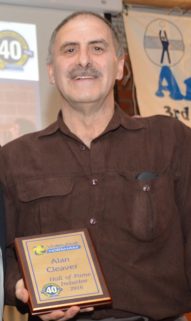 Alan moved to Horsham in 1981 after a distinguished career with the Bendigo Volleyball Association in both a playing and coaching capacity. Had an immediate impact on the young Association, assisting with the introduction of the competition bylaws and modelling the Association’s constitution on the Bendigo one. Was president in 1982-1983, Country Championships representative in 1983 and 1984 and worked hard to get players up to a standard so as to compete at a representative level. Performed for the Association both on and off the court.